Paul and the Miraculous: A Historical Reconstruction, by Graham Twelftree

Many Pauline scholars are of the (critical) opinion that the miraculous played little if any role in Paul’s life or ministry. In this we are supposed to see a disjunction between the ministry of Jesus in the Gospels and that of Paul himself. Paul, so they say, was almost exclusively “a thinker and theologian” for whom the miraculous was greatly downplayed. Keep reading... 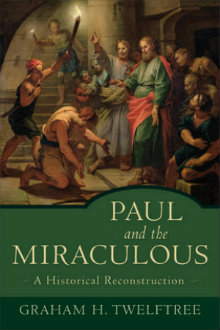 Many Pauline scholars are of the (critical) opinion that the miraculous played little if any role in Paul’s life or ministry. In this we are supposed to see a disjunction between the ministry of Jesus in the Gospels and that of Paul himself. Paul, so they say, was almost exclusively “a thinker and theologian” for whom the miraculous was greatly downplayed. Twelftree is to be commended for demonstrating that “the long-standing and widely held view . . . that Paul thought he was waging war with the word alone is patently false. Paul reminds the Thessalonians that his gospel ‘did not come to you in word alone’ (1 Thess. 1:5)” (316) “but also in power and in the Holy Spirit and with full conviction.”

Following a thorough examination of the many texts where the miraculous characterizes Paul’s personal life and public ministry, Twelftree believes that “for Paul, no more could the gospel be proclaimed without words than it could come or be experienced without miracles. Without the miraculous, Paul may have had a message, but he would not have had a gospel. Without the miraculous, there was no gospel, only preaching” (317; emphasis his). Thus, Twelftree rightly concludes that “for Paul, miracle was a fundamentally generative factor for his life, theology, and mission” (278).

The inclusion of Twelftree’s book on Paul and the miraculous in my best books of the year list comes with a measure of hesitation. This is due, in large part, to three factors.

First, after a critical study of the book of Acts he concludes that “a number of Luke’s stories and references to the miraculous in Acts have to be set aside in assembling material that can contribute to a reconstruction of the historical Paul” (270). Among those that he would dismiss are: Paul being healed of blindness (9:18; 22:13), the healing of the lame man at Lystra (14:8-10), the report of signs and wonders (15:12), Paul’s missionary call to Macedonia (16:6-11) together with his escape from prison in Philippi (16:25-34), and several others as well. In other words, he doesn’t believe such miracle stories meet the sort of historical criteria essential to establish that they actually occurred in Paul’s life as reported by Luke. He isn’t saying that these narratives have no historical value at all, but that he “was unable to establish them as probably originating in, or being faithful to, firsthand reports of his [Paul’s] life” (270). This is very unfortunate and serves only to undermine an otherwise excellent book.

The second factor that diminishes my confidence in Twelftree’s approach is that he endorses the presence in the NT of pseudepigrapha. In other words, he argues that Colossians, Ephesians, 2 Thessalonians, 1 Timothy, 2 Timothy, and Titus, while carrying the name of Paul, were not in fact written by him. These epistles are “the work of his disciple or disciples rather than of Paul himself” (280). These epistles, then, “are to be taken as the remembered Paul rather than the historical Paul” (280).

Finally, although it was not part of his purpose in writing the book, Twelftree makes no attempt to relate his conclusions to what the ministry of the church in subsequent centuries (our own included) ought to be. I probably shouldn’t fault him on this ground, as his aim was simply to reconstruct the history of Paul himself (note the sub-title, “A Historical Reconstruction”). But I was left asking the question most pastors and Christians today would ask: “So what? Now what? How does this affect my approach to ministry today and with what expectations ought I to preach and pray and serve others in need?”

These criticisms notwithstanding, I found Twelftree to be insightful and very persuasive in his argument that the Apostle Paul was a thoroughgoing supernaturalist who viewed the miraculous work of the Holy Spirit as a very important element both in personal life and in the ministry of the body of Christ. This book totally debunks the oft-heard cessationist claim that, as the years passed and Paul came near to death, miraculous spiritual gifts and other supernatural phenomena gradually diminished and eventually disappeared altogether from the life of the church. Those who continue to argue in this way must answer Twelftree or remain silent. For that reason alone, he merits inclusion in my list.

I don't know much about the principles governing "historical reconstruction," but...I don't understand how somebody who dismisses significant portions of the Biblical record is in a position to make a convincing case about Paul's position on anything! Particularly the supernatural - ironic!! (But like I said, I am speaking out of ignorance.)

Points 1 and 2 would eliminate me from taking anything this guy says to be worth much. As Russ used to say, 99% truthful is still a lie.

Your email address will not be published. Required fields are marked *

The Great Tribulation: Past or Future?

An Evening of Eschatology

The Central Message of My Book, The Singing God